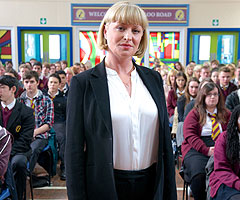 Waterloo Road, now in it's ninth series, returns to BBC1 on Thursday 5th September. Series eight concluded in dramatic fashion when regular character Tom Clarkson (Jason Done) was killed when he was pushed from the school roof by Kyle Stack (George Sampson). In the new series the school is still in mourning for Tom, especially Kacey Barry (Brogan Ellis), who is struggling to cope without the teacher.

New characters will include teenage twins Lenny and Lisa Brown, played by Joe Slater and Caitlin Gillespie, and recently-qualified science teacher Sue Spark, played by Vanessa Hehir. Lenny and Lisa will feature in episode one of the new series with Audrey McFall, played by Georgie Glen, as she suspects they are being neglected at home.

Mark Benton, whose popular character Daniel 'Chalky' Chalk left Waterloo Road for a new job in London, will also return to the show for an undisclosed number of episodes.

Other storylines in the new series will explore how new Headmistress Christine Mulgrew, played by Laurie Brett, is settling into her role, while Deputy Head Simon Lowsley, played by Richard Mylan, hides a secret which could affect his career and unsettle the staff. 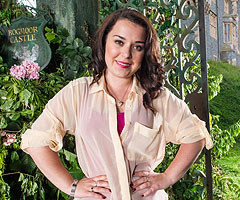 CBBC has commissioned a second series of the hit children's comedy Dani's Castle, the 13 episode series is currently in production and is being filmed in Northern Ireland. In the new series Dani has moved on. She's a Hollywood star now, but Bogmoor Castle is still her home and she cares about the people who live there. And if she can't be there in person, she can at least be a font of wisdom on the webcam.

The show stars Dani Harmer, Shannon Flynn (Waterloo Road), Kieron Alleyne and Richard Wisker (Friday Download), who are struggling to run the dilapidated Bogmoor Castle that Dani inherited from her aunt in series one. Featuring guest stars such as Jedward, Dani's Castle has already established itself as essential viewing for young people, consistently rating in the Top 10 children's programmes each week. The new series will introduce new cast members Toby Murray as Dylan and Darragh Mortell as Jack.

"Dani's Castle has already established itself as a hit amongst viewers and I'm delighted that we'll be back for more," says executive producer Elaine Sperber. "Dani has a huge following on CBBC and in this new series we'll be taking the opportunity to introduce new talent, new characters and plenty of interesting guest stars."

Dani's Castle is due to transmit on CBBC in late 2013. The series is produced by The Foundation, a Zodiak Media company, for CBBC.